Gainesville ISD received honors from the Texas School Public Relations Association (TSPRA) for outstanding work in education communications. The awards were announced at TSPRA’s annual Star Awards Celebration on February 24, 2021, at the Embassy Suites in Denton, Texas during the association’s 59th annual conference.

Each year, TSPRA members are encouraged to enter pieces of work into the STAR awards. To be eligible, these items must have been completed during the 2019-2020 school year (July 1, 2019-June 30, 2020). Gainesville ISD received four Star Awards during the annual state conference, including one Best of Category award, two silver star awards, and one bronze star award.

This year, 1,406 entries were submitted. Entries are divided into three divisions based on the number of students the district, foundation, or organizations that serve under 10,000 students; 10,000 to 30,000 students; and over 30,000 students. Independent judges evaluate and score each entry based on its own merit. Bronze, Silver, and Gold Stars are awarded based on set criteria.

The picture showcases Junior Achievement Day at Chalmers Elementary, which was organized by the GISD Education Foundation. The volunteer pictured, Trey Shalk, is a member of the Foundation and a well-known local businesses owner. The picture depicts the hands-on nature of the day and the importance of community involvement in our schools.

The picture is of a young performer singing at the annual Hispanic Heritage Night event. The event is attended by the families of Edison and Chalmers dual language and bilingual students and is a showcase of the program. The picture captures not only the heritage of the student, but his talents and courage to sing in front of a large crowd.

The photograph was taken during the youth golf camp, hosted by our GISD golf coaches.  As you can imagine, the concentration of a young person while playing golf is hard to capture. The excitement this young golfer had on the putting green, accompanied by the interest of the other player watching on, was a golden moment.

The purpose of this picture is to share the senior cell phone project with our community. The project was in its first year and was a new service project for our National Honor Society students. It was developed as a result of the local senior citizen activity center, the Stanford House, sharing a need that the seniors had expressed regarding the use of their personal smartphones. 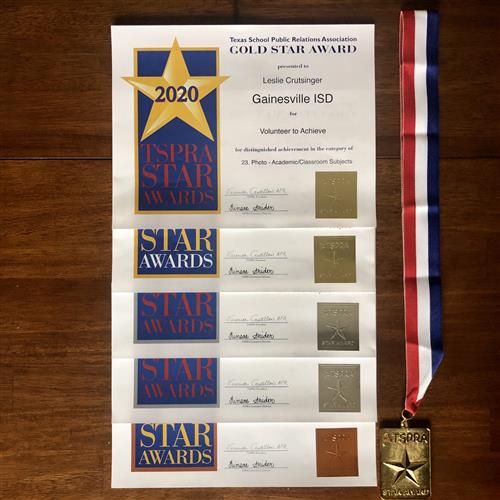