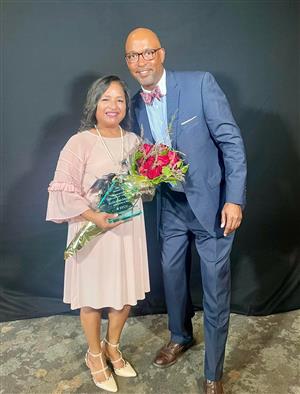 District winners who competed for the regional award were required to submit their resumes describing their educational history and professional development.  In addition, they were asked to write their own professional biography as well as five lengthy essays.

The regional selection panel, composed of teachers (including three past regional winners), assistant principals, and central office staff from school districts within Region 11, reviewed and scored all of the essays before selecting Moreno as the elementary regional winner.

Nora began her career in education in 1992 in Nocona ISD, where she served as an ESL Instructional Aide until 2001.  This experience became an avenue of personal growth for Nora, as she became more proficient in English and gained the confidence to obtain her GED and enroll in college to become a teacher.

In 2002, she came to Gainesville ISD, where she has served as a bilingual teacher for the past 20 years. Her passion is for educating the Spanish-speaking population, both students and families.  Throughout her time at GISD, she has been instrumental in leading and growing the dual language program. Nora is the creator and coordinator of the annual Fiesta Night program, formerly known as Hispanic Heritage Night, which brings thousands of community members together every year.  She has served as an ESL instructor, mentor teacher, team lead, and on the LPAC and Site-Based committees.

Moreno’s philosophy of education has always been that every student has the ability to learn and grow through dedication, love, and support. The implementation of the Family Reading Project is proof of this belief.

“Being a bilingual teacher and growing up as a limited English-speaking parent myself, I knew the struggles that a parent goes through in trying to help their child read,” Nora said.  “I knew that if I could guide parents in reading strategies and how to help their whole child, they could be successful not only in the classroom, but outside as well.”

Moreno’s story detailing her childhood poverty and working to help support her family touched a special chord with the judges.

“She came from extreme poverty to become an outstanding educator,” agreed Dr. Richard Valenta, a judge from Denton ISD.

In her essay, Nora explained how she grew up in Mexico in an impoverished family of seven, living in a small hut and sleeping on a rocky floor.  At a very young age, she saw the need to help provide food for the family when they had none. Nora and her siblings began working for food every morning before attending school.  Eventually, at the age of 12, her mother gifted Nora her very first pair of shoes.

“I learned that poverty can be painful at times, but shared pain can bring a family closer together,” Nora said. “ My family and I survived the embarrassment of begging for food and endured the humiliation of others making fun of our clothes.  As a teacher, I am on a mission to help all the Noras in my classroom to chase their dreams until they catch them!”

“Her message is so powerful,” shared Alexis Miller, a judge from Lewisville ISD.  “Her journey is inspirational to all – whether you are a first-year teacher or a 30-year veteran – her story will resonate with you!”

It is teachers like Nora Moreno whose inspiration in the classroom echoes in the students’ families, causing a ripple effect of positivity, confidence, and self-improvement in not only the district, but the entire community.

“The little girl who rose before dawn to help provide for her siblings was not sad at all,” Nora said.  “She was content and happy in her innocent world.  Perhaps the little girl that I was, and the woman I have become, were both rich after all.” 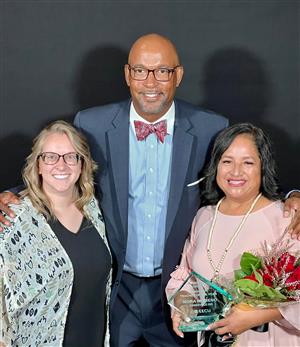